Who is Francis Schaeffer?

Who Is Francis Schaeffer? Unfortunately, when one speaks of Schaeffer today, many do not immediately know who you are talking about, where at one time, he was a household name among Christians. The following is a brief history. Our older timeline history is still available for viewing here. Or you may view our updated timeline here.

Francis Schaeffer was born in 1912 and grew up in Germantown, Pennsylvania. As a youth, by mistake, the library accidentally checked out a book to him on philosophy. He decided to read it. He found that the book raised all of the questions of life. As a result, by the age of 18 he had become an Agnostic. At the time, he was a church goer at a church that was greatly influenced by Religious Liberalism and which did not believe the Bible was true. Nevertheless, for the sake of honesty, he decided to read the Bible to give it a fair hearing. At the end of his reading, from Genesis to Revelations over six months, he realized that it answered all of the core questions of life and Francis Schaeffer became a Christian.

A Call to Ministry and a Providential Meeting

Francis Schaeffer, known by his friends as Fran, soon thereafter felt the call to ministry and began the pursuit of education. It was during his college years he met his wife while attending a youth event at his church, where the speaker was presenting on the topic: “How I know that Jesus is not the Son of God, and how I know that the Bible is not the Word of God.” During the lecture, a girl named Edith jumped up and began to make a reply, when across the room Fran, who was already standing began to speak. Edith sat back down and listened in amazement. Edith ask her friends, “Who’s that boy?” She was not aware of anyone in the church who knew any replies against Modernism. Edith soon rose to make her points, quoting from J. Gresham Machen, and Robert D. Wilson. of Westminster Theological Seminary nearby. Fran likewise asked his friend, “Who’s that girl?” He was impressed and was not aware that anyone attending the church was familiar with Old Princeton Apologetics. Thereafter, Fran would ask Edith if he could walk her home, to which Edith replied, "I have a date." Fran looked at her calmly and simply said, "Break it!" Thus began their life together as defenders of the faith.

Seminary, Pastorates and Children for Christ 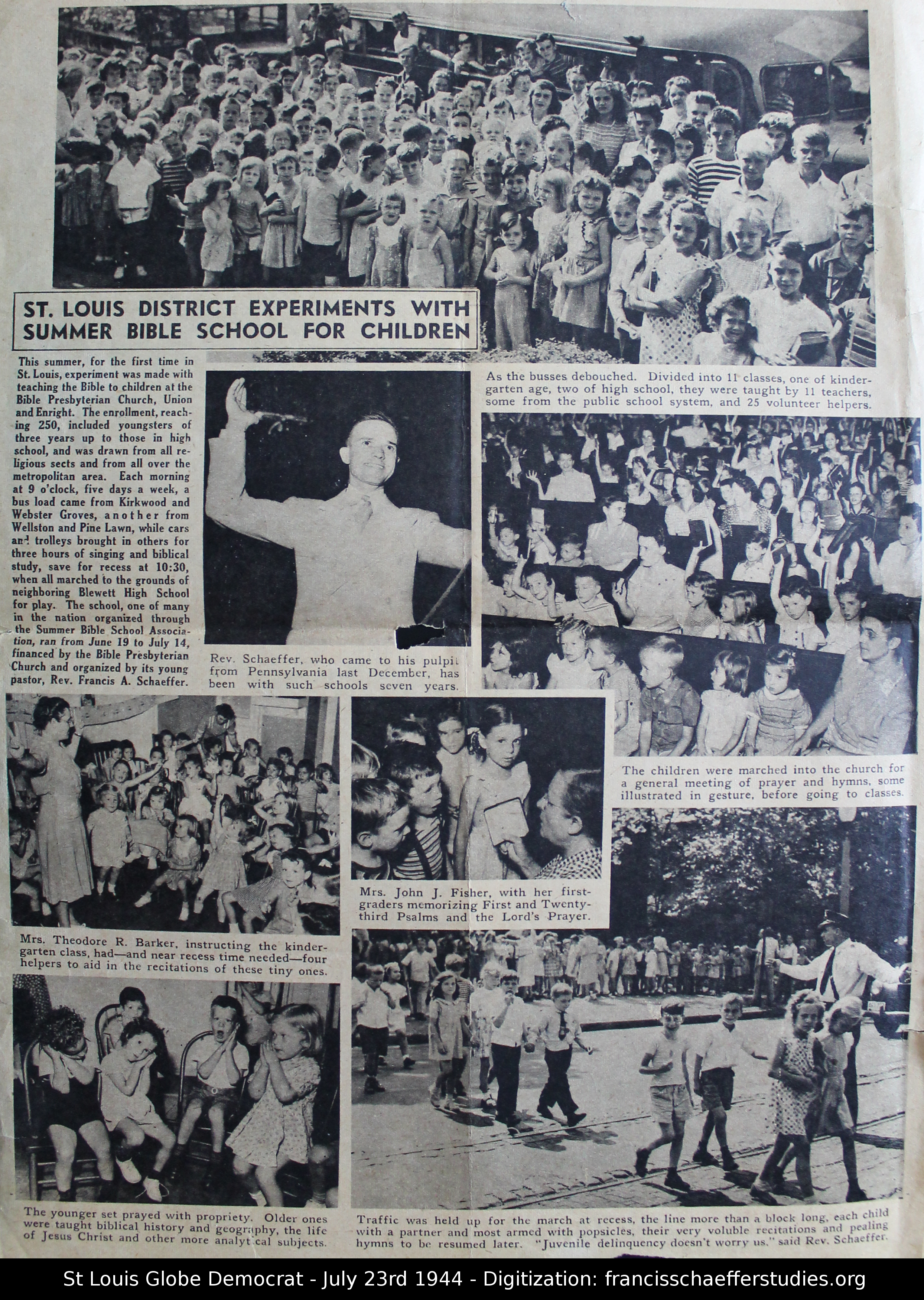 At the time that Fran met Edith, he was currently attending Hampton Sydney College, he went on to graduate and then entered Westminster Theological Seminary and then finally Faith Theological Seminary. Fran would be instrumental in the setup of the new seminary and would be it's first graduate. He would tirelessly assist his mentor and it's first mentor, Dr. Allan A. MacRae (see photo at bottom). His first pastorate was in Covenant Presbyterian Church in Grove City, Pennsylvania (now Covenant OPC, see history), where he began a revolutionary children's ministry inspired by the inspired by the summer Bible school program developed by Abraham Lance Lathem. Thereafter he served as an associate pastor directly under Dr. Abraham Lance Lathem at Bible Presbyterian Church in Chester. His service was largely involved in a large building project, which Fran had experience in during his time in Grove City. Yet, Fran and Edith's heart was for children's ministry and they eventually accepted a call to the Bible Presbyterian Church in St. Louis, Missouri in 1943. It was here that they founded their ministry called “Children for Christ" (see photo at bottom), after bringing the first summer Bible school program (what we now call vacation Bible school) to St. Louis. Their teaching methods and success was revolutionary. Local schools where even involved. Francis would be a pastor in the states, for over 10 years before he and his wife Edith were called to be missionaries to post-war Europe with the charge to “strengthen that which remains” by the Independent Board for Presbyterian Foreign Missions of which he was a trustee. After a tour of Europe, Fran would resign his pastorship and his position on the board to accept the new role. They would be active in spreading the ministry to children in Europe in their early years as missionaries, as well as being active in encouraging European churches to join the International Council of Christian Churches.

During the early 1950s, having been involved in making an important stance for the historic Christian position, and the purity of the visible church, against the advances of Religious Liberalism, Dr. Schaeffer began to sense that both he and others around him were not showing much of the “reality” of what the Bible teaches should be the result of the Christian faith. This produced a spiritual crisis for him. How could one stand for truth and not compromise the reality of one’s faith? How could one uphold truth and also maintain love and Christ’s compassion? As a result, Schaeffer began to be deeply moved to examine his own spirituality. This search for “reality” forced Schaeffer to rethink his entire position, and the results provided the groundwork for all of the future ministry that was to follow.

The Founding of L'Abri

In 1955, after returning from the states and growing increasingly disturbed by denominational trends that lacked the deeper spiritual reality Schaeffer was now teaching and prescribing, Francis and Edith took a step of faith and resigning from their missions board, and founded a ministry called L’Abri Fellowship, through a series of miraculous events. The Schaeffers had received notice from the Swiss government that they must leave Switzerland permanently within six weeks for their “religious influence” in the Catholic canton where they had settled. Yet, one of many providential events was that the Consul of the American Embassy turned out to be a former school-mate of Francis, named Roy Melburne, who was originally from Germantown, Pennsylvania. He would help them retrieve instructions on how to appeal their case. God would provide further help in meeting a legal deadline to find a new home in Switzerland in a nearby Protestant canton, to prevent them from having to completely leave Switzerland, and a check would arrive in the mail at just the right time from two persons in the states with the message: “Now tonight we have come to a definite decision, and both of us feel certain that we are meant to send you this money...to buy a house somewhere that will always be open to young people.”

L’Abri is a French word that means “the shelter.” L’Abri is a community dedicated to providing “honest answers to honest questions” as a primary tenant of ministry. At that time, during the period of the 60s, people were actively seeking spiritual enlightenment and asking deep philosophical questions. L’Abri became a haven for people to explore the questions of life and the Christian answers in an honest way. People who visited, were immersed in the Schaeffer’s spirituality, experienced love and hospitality, and witnessed a vibrant life of prayer that often disarmed them of their false perceptions and paved the way for personal explorations of faith. The Holy Spirit used the work of the Schaeffer’s to bring thousands to Christ and the deeper spiritual life, from all over the world.

Francis Schaeffer gave lectures at Wheaton College in 1968 that would be the foundation and beginning of his books. He would go on to become an international speaker and author, responsible for numerous books and several significant film documentaries. Schaeffer’s works cover subject matter from art to pollution, to philosophy, culture, spirituality, and government, all unified with an emphasis on the Lordship of Christ in the whole of life. To Schaeffer, if God is there, there is no limit to His authority in the lives of His children. 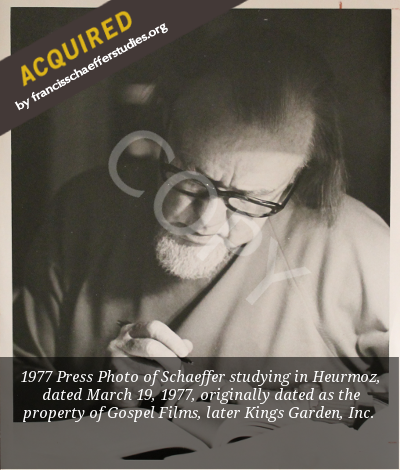 In his later years, Schaeffer’s influence expanded and he became well known for being one of the first Protestant theologians to raise awareness on abortion and euthanasia being fostered by the secular worldview. He was very influential on multiple movements, including the Christian Right. Here, it is important to note that Dr. Schaeffer is rightly considered a Conservative, by his general explanation of government, found in his work A Christian Manifesto. It can be shown that he had strong views on the history of American Government and on various Conservative issues. Yet, Schaeffer’s view on government was unique, and perhaps might stand in contrast to some Conservative views today (at least in practice). They stand in many ways as warnings of the pitfalls on Christian involvement in government. Firstly, he did not blindly embrace a right or left-wing agenda, but rather believed that all concepts should be weighed in light of Scripture. Secondly, he believed in a concept he called co-belligerence, whereby he believed that he could work with people on specific causes who might differ with him on the motives, theology and philosophy. Thirdly, it is important to note that Schaeffer was skeptical of wrapping Christianity in the national flag and believed that the attempts to unify church and state from Constantine on down to our present time was a mistake. He further explicitly rejected the notion of a modern theocracy and believed that church and state could not and should not be unified until Christ’s return. Yet he did not believe however, that any of these previous convictions prohibited us from bringing Christian principles to bear in the area of politics. Those who are critical of Dr. Schaeffer in this area are often remiss in their undertanding of these points.

Dr. Schaeffer’s greatest contribution was perhaps summed up by President Ronald Reagan’s words of reflection upon Dr. Schaeffer’s passing in 1984, which notes his thought and compassion.

He will long be remembered as one of the great Christian thinkers of our century, with a childlike faith and a profound compassion toward others. It can rarely be said of an individual that his life touched many others and affected them for the better; it will be said of Francis Schaeffer that his life touched millions of souls and brought them to the truth of their Creator.

This brief biography has hopefully provided you a good starting place, however it leaves out a number of significant historical events in the life of Francis and Edith Schaeffer. Please see our blog post on The Top 5 Schaeffer Biographies for additional recommended reading.

The Works of Francis Schaeffer

The Works of Francis Schaeffer

Videos on the Life of Francis & Edith Schaeffer

The following videos were produced by Day of Discovery.